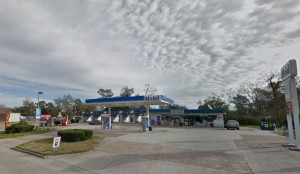 On Monday , December 23, 2013, at 3:50am the Caldwood Food Mart, located at 55 East Caldwood was burglarized. The burglar gained entry by climbing on the roof and cutting a large hole in the metal roofing . He then crawled through the sub ceiling and dropped down in a back hallway. He was captured on video surveillance and he is described as a male, wearing a long sleeve jacket , a cap, gloves and something covering his face, The burglar removed cash and several cartons of assorted cigarettes from under the front counter. He tried to pry the safe open under the front counter but was unable to get it open. He attempted to pry open the ATM machine by the front door and caused substantial damage, but didn’t gain entry.. The burglar moved on to the electronic slot machines against a rear wall. He was able to pry open a money drawer on one of the machines and removed cash from it . The burglar exited the business through a rear door.

If you have any information about this or any other felony crime, contact Crime Stoppers at 409-833-TIPS.

Solve this Crime
If you have any information about these crimes or any person(s) involved, you are urged to call Crime Stoppers at or submit a Web Tip . You do not have to give your name. CRIME STOPPERS will pay a cash reward of up to $1000 and you can remain anonymous.

JCSO would like to thank Antioch Baptist Church and Farmers to Family for the wonderful food boxes! ... See MoreSee Less

This morning around 5:20 a.m., Courvilles Catering, 1700 Rose lane at Hwy 90, Beaumont, Texas was burglarized. The surveillance video captured the images of 2 men tearing into the cash register and stealing other items from the restaurant to include 5 briskets.

Once the video was reviewed, Deputies and Officers from several agencies recognized the white male in the video as 51 year old Tomas Moraida. JCSO Detectives worked with the Jefferson County District Attorney’s Office and were able to obtain a Burglary warrant for Moraida’s arrest.

JCSO Warrant Officers arrested Moraida in Beaumont this afternoon AT 2:05 P.M. in the Avenues neighborhood, (Forsythe and Avenue E). The white Ford sedan that he was driving was seized and towed. The investigation continues. Everyone is curious-we did not recover the brisket.

We are still searching for the identity of the black male accomplice involved in this burglary. (see photos) If you have information about this burglary please contact Crime Stoppers at 409-833-TIPS(8477), log onto www.833TIPS.com or download the P3 app. You will not be asked your name and you could be eligible for a cash reward.
... See MoreSee Less

Glad you got this trash off the street!! Even if it’s just for a day or two.

Other dude is cooking the brisket. Ain't you got hounds??

He has been on tape with his vehicle for several burglaries in Nederland. I hope they make the connection.

Goes to show they need to stay in jail do not give them bail so they can be on the streets in less than 24 hours. Let’s clean up the crime

This isn't his first burglary. They've been hitting businesses.

Great news and pray you all find the black male! 🙏

Someone needs to take him fishing

When I was growing up, always heard, " Don't steal a chicken with a thief, If he got caught, he will tell on you"

Be watching out for the big BBQ this weekend that's where you'll find the Brisket.

Glad he was apprehended.

Look at this absolutely gorgeous pasta dish that has been delivered to us. The Swindells deliver delicious meals to our office every Friday. We are so grateful for our friends who take care of us here.   ... See MoreSee Less

PLEASE SHARE! If you have information about this crime or other criminal activity, contact Southeast Texas Crime Stoppers at 409-833-TIPS or down load the P3 TIPS app and submit your tip with your smartphone or tablet. All tips are anonymous and you could be eligible for a cash reward up to $1,000! ... See MoreSee Less

Call 409-833-TIPS if you have information on this or any other crime. You do not have to give your name and could earn a cash reward. ... See MoreSee Less

As the new school year begins, the Sour Lake Police Department would like to remind all HJISD parents and students about School Zone safety and traffic laws.

- Cell Phone use inside the school zone is strictly prohibited, which includes texting.

- Speed limits inside school zones are greatly reduced, so be sure to pay attention to those posted School Zone speed limit signs.

- When a school bus has its lights activated it is loading or unloading children. Passing a school bus on either side of the roadway while these lights are activated and the bus is stopped is a violation of the law.

We here at the Sour Lake Police Department take our children’s safety very seriously, which is why we enforce a ZERO TOLERANCE POLICY on any of these violations. ... See MoreSee Less

Are there any plans to utilize the police officers who are parked at the elementary school in the morning and afternoon to direct traffic? Traffic would flow more smoothly if there was someone to tell which car to enter the parking lot and to assist cars pulling out and going to the left. I feel this is an area where an accident could easily occur as people are trying to leave the parking lot. I appreciate that law enforcement is present but is it possible that they will be taking a more active role?

Did You Know?
State law requires that drivers stop when a school bus is stopped and operating a visual signal – either red flashing lights or a stop sign. Drivers should not proceed until the school bus resumes motion; the driver is signaled by the bus driver to proceed; or the visual signal is no longer activated.
Drivers who illegally pass school buses face fines up to $1,250 for the first offense. For individuals convicted of this offense more than once, the law allows the individual's driver license to be suspended for up to six months. (A ticket for illegally passing a school bus cannot be dismissed through defensive driving.) Additionally, this offense could potentially include criminal charges if they cause serious bodily injury to another. ... See MoreSee Less

Some schools here in Southeast Texas will resume in the next few weeks. This means that school buses will again be delivering precious cargo to and from those schools.

According to Texas law, drivers must stop when a school bus extends its stop sign or turns on their flashing red lights. When a school bus is stopped, drivers must come to a complete stop on all lanes in both traveling directions; this is with the exception of a road with a raised median or barrier.

Jefferson County Sheriff's Deputies will be out on the roadways to ensure the safety of our children. #OneCountyOneCommunity ... See MoreSee Less

The Jefferson County Sheriffs Office has received numerous calls from citizens in reference to a phone scam.

The caller falsely represents themselves as Entergy employees.

They are telling citizens that their electricity bill is due immediately and if they don't make arrangements to pay the bill automatically, they will be disconnected.

They are telling people who pay by check or a monthly automated payment that they have not received their payment.

This is a SCAM. if you have questions about your Entergy bill, contact Entergy directly.

The number that shows up on caller ID is Entergy's actual number . The message that they leave you is to call another phone number to pay your bill.

That’s the call I got today.

I got that scam call. Was a computerized male voice instructing me to call a 1-800 number.

Hali Janice, please tell MeMaw about this. I wish she would just ignore any number she doesn’t recognize.

Yes my mother received a call this morning 😡😡😡

This happened to me last year. When I reported it to PAPD they said they don't do anything about those calls, but to call Entergy. Thank you Jefferson County Sheriff Department for warning your county! m.panews.com/2019/10/08/pastor-blake-alling-warns-of-entergy-scammer/

Mark Prince Kelsey Richard this is why I ask y’all!!

I got a Social Security Scam today:(

I also got the Social Security scam today.

I got the SS call today also.

On the social security fake calls... Ask "what state are you in?" .. they can't answer.. I laughed so hard..

This is why I NEVER answer calls I don't know

They called me yesterday

I got one the other day from Apple saying all my devices linked to the iCloud were locked because of suspicious activity. Dude asked me how many Apple products I had and I told him none so why is he calling me

We got the energy call 2 days ago and knew it was a scam becsuse I knew our bill was paid. And the number to call repeated many times

I just got the call

I got one yesterday

I got one from energy and one from social security